SPECIAL PRODUCTS
THE PERFECT SUPPLEMENT FOR YOUR SYSTEM

It is important to reduce the impact of rail noise on residents in densely built areas along railway tracks. The greatest source of noise from rail traffic is the rolling noise caused when the wheel comes into contact with the rail. When used together with other noise protection measures, rail dampers reduce the vibrations that arise in rails, thus also diminishing the consequent noise emissions into the surrounding area. Moreover, they also minimise annoying squealing produced as trains go round curves. Calenberg rail dampers are fastened on both sides of the rail using steel clamps and therefore mitigate rail vibrations directly at their point of origin, thus also having a direct, positive effect on sound emission. Calenberg rail dampers are made of a compact combination of steel and an elastic rubber compound. The rail dampers and rail profile are matched with one another to achieve the most effective noise reduction. Durable and maintenance-free, rail dampers can be easily replaced and recycled if they should reach their wear limit.

A track bed structure frequently used in railways, tramways and underground railways is ballastless track, where a rigid upper structure consisting of concrete or asphalt track slabs replaces the usual ballast and railway sleepers. Such track systems may seem rigid and immobile at first glance. Yet even ballastless tracks move, at least to a limited extent as part of their design. This is because of internal restraints due to fluctuations in temperature, external forces applied by trains, particularly when they brake or accelerate, and lateral forces (centrifugal forces) when trains go round curves. Movements caused by these forces need to be restricted so that the track stays in its intended position.
Directional control bearings are special bearings designed to absorb the forces described above and restrict movement, thus providing track position protection in ballastless track systems. These bearings are sturdy rubber-metal moulded parts made of weather-resistant stainless steel and a high-quality, long-term-resistant rubber compound, which is vulcanized and force-fitted onto the stainless steel in the factory. The bearing rear features stainless steel anchorages, which can be easily concreted into side walls of track troughs or similar to protect the joint between the side wall and the sliding support plate, for example.

A track bed structure frequently used in railways, tramways and underground railways is ballastless track, where a rigid upper structure consisting of concrete or asphalt track slabs replaces the usual ballast and railway sleepers. As a general rule, the upper and lower structures are separated by a layer which is elastic to a lesser or greater extent. Cams, humps or similar components are fitted to the substructure, protruding into the track slab structure to transmit shear and constraining forces from the track and into the substructure. The cams are then fitted with EPDM shear cam pads, which allow a "soft" absorption of thrust and constraining forces after the track slab is concreted into position. This avoids rigid connections between the upper and lower structure, which could otherwise cause damage to the entire track. As with all elastic bearings, it is important to ensure that fresh concrete isn’t accidentally poured inside the pad joint, for example. Otherwise, this will create a rigid joint after the concrete has hardened, thus neutralising the effect of the elastic joint. Suitable Calenberg special bearings can be supplied in dimensions adapted to the specific project requirements and in thicknesses of 5, 10, 12.5, 15 and 20 mm. The pads have a load capacity up to 15 N/mm², depending on the format, and are made of a high-quality rubber material that remains resistant to ageing, high load and elastic for the track’s entire service life. EPDM shear cam pads prevent damage and help to reduce track maintenance costs. 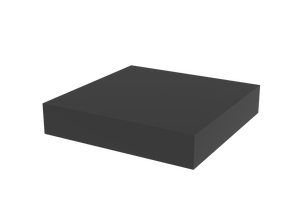 Special bearing for the absorption of shear- and restraint forces in slab track systems. Can be supplied in dimensions adapted to the specific project requirements and in thicknesses of 5, 10, 12.5, 15 and 20 mm. The bearing has a load capacity up to 15 N/mm², depending on the format. 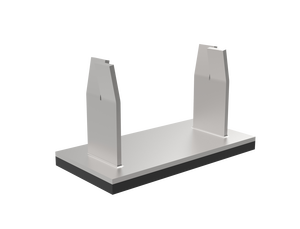 Special bearing for securing horizontal track alignment or absorption of horizontal forces in slab track systems. Delivered as stipulated on data sheet; differing project-specific dimensions may be available on request. 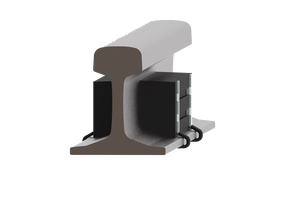